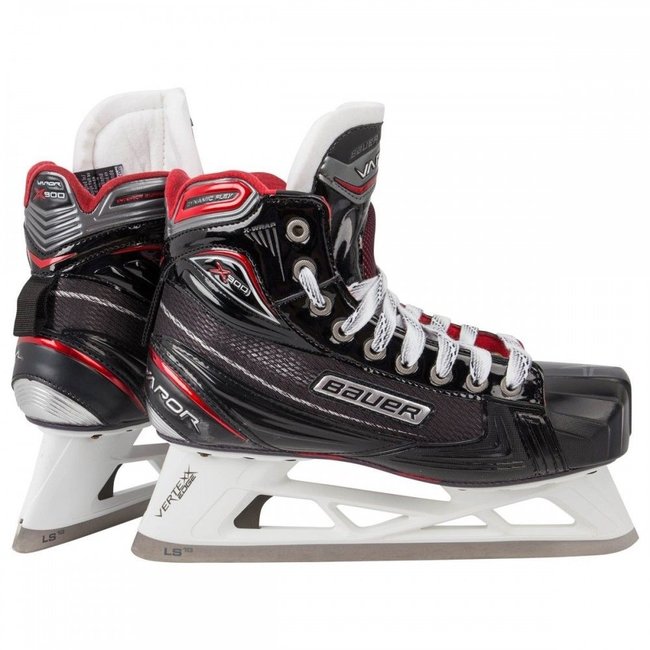 Continuing on one of the most anticipated new lines in goaltending in the recent years, Bauer has brought one of the most engineered and technologically advanced lines of gear to the goalie market. The Vapor X900 skate is packed with new features which strive to change the face of goaltending.

With the success of the “cowlingless” goalie skate, the Vapor X900 skate is designed to increase the attack angle of goalies moving while in the butterfly position as well as recoveries and movements around the crease. The outer cowling has been removed and a “traditional” looking player holder has been added to the boot. The boot and the toe cap have been stiffened and reinforced to protect against any shots on the toe.

Included in the new Vertexx Edge Holder is the 3mm LS1G steel specifically designed for the anatomical position the goalie will be in. This steel is removed via the Edge Trigger system found under the heel and gives goalie the opportunity to change their steel on the fly.

The Vapor X900 boot has more volume in the width and ankle, when compared to the Supreme counterpart. This means that the eyelets are moved forward so there can be more wrap and tightness in the ankle area. The boot has a fully symmetrical design where the inside and outside edge of the boot is the same height to give the goalie more support running up the inside and outside of the leg. Also, the comfort edge and dynamic flex collar padding adds to the softness the skate provides. The tongue of the skate features a Pro Felt design which holds the goalies foot in a natural position and gives comfort on the top of the foot.

If you are an intermediate-level goalie who is looking for some of the best innovations on the market but who wants more support in their boot, the Bauer Vapor X900 Senior Goalie Skate will not disappoint you!